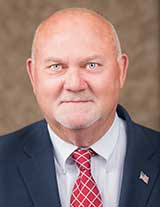 Neil Combee was first elected to the County Commission in 1988 and served until 2004. He was re-elected in the 2020 general election.

Combee, a Polk County native, attended what is now Polk State College and Florida State University. His goal as Commissioner is to preserve the rural character of Polk’s unincorporated areas and work to keep the county an affordable place for our residents. During his time at the county, Combee also wants to create a system and schedule for an external review of all operations, which are funded by Polk’s taxpayers.

Following his initial service to the Board, he was appointed in 2005 to the governing board of the Southwest Florida Water Management District and served until 2012. Combee subsequently served in the Florida House of Representatives until 2017, when he was appointed by President Donald Trump as state executive director for the United States Department of Agriculture’s Farm Service in Florida and the U.S. Virgin Islands.

You are being redirected to:

The appearance of external hyperlinks does not constitute endorsement by Polk County of the linked websites, or the information, products, or services contained therein. Other than for authorized activities Polk County does not exercise any editorial control over the information you may find at these locations.

All provided links are consistent with the mission of this website.

Please let us know about existing external links that you believe are inappropriate.